A while ago, Jo joined the project Alligator Gozaimazu. A sound collective with more than 60 members. In times like these, the cooperation between the artists was mainly an exchange of sound files via a drop folder. This has resulted in a lot of joint compositions that have been released on eight compilations on Bandcamp so far. The revenues from these samplers all go to Sea Watch. Orange ’Ear has already produced a livestream in February to bring some of the Alligators together virtually. But now we are overjoyed to have met many of the artists in person.

From August 13th to 15th 2021 the festival Alligator:Go! took place in Munich and Orange ’Ear is happy that we could broadcast the concerts for you to the world. 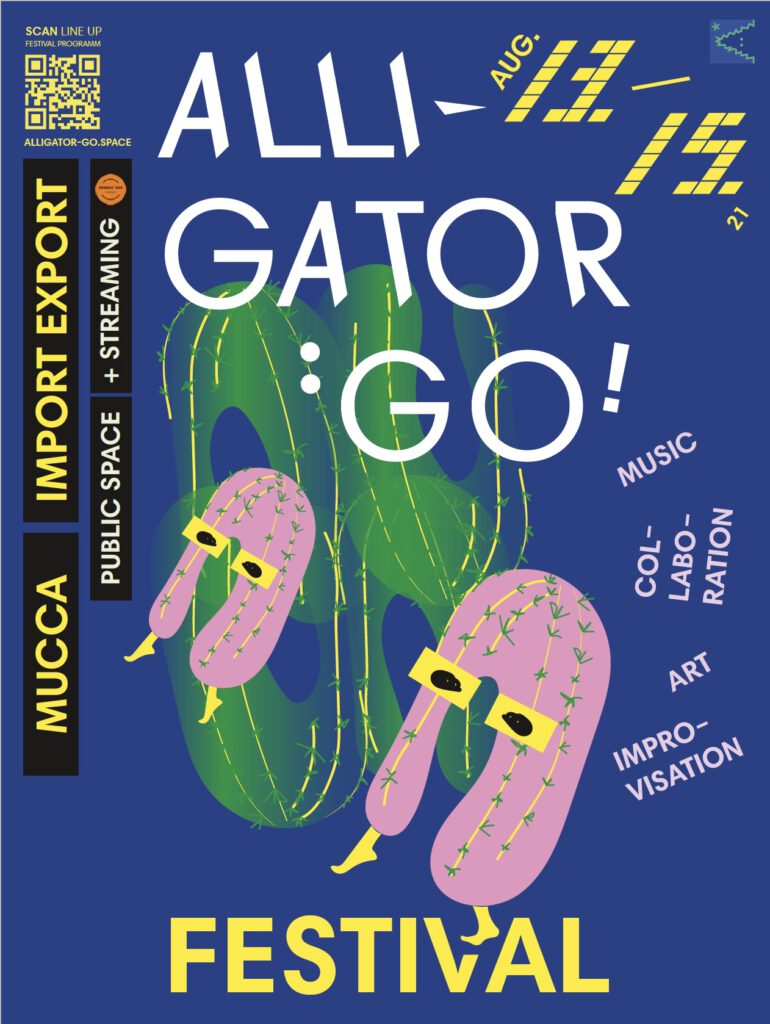 Alligator:Go! is a festival for experimental music and art More than 30 musicians* and artists* from Munich and other places, cities and countries that were already connected online will come together offline for the first time from August 13-15. The open-air stage of IMPORT EXPORT offers space for improvised music. Electronic music reinterpreted with medical meters, dulcimer and cello, queer dream-pop and contemporary vocal performance mix up the raucous noise mantra – „in doubt for the contradiction“. Professional musicians* and artists* who never tire of experimenting further collaborate with people who have only recently discovered playing and producing together.

The Alligator:Go! festival wants to make you want to look beyond your own borders and explore future forms of collectivity and community together. What possibilities will open up when artists and musicians join together again offline? Is it time to unlearn familiar forms of encounter and try out something new? Right next to the IMPORT EXPORT open space, in the adjacent MUCCA Halle, the Munich based projects will built a modular spatial installation: over the course of the festival, it will become a shell for self-built music, a repository for sketchy sound notes, a projection surface for visuals, and a streaming interface.

Based out of and , the Alligator:Go! festival wants to spin temporary webs in the surroundings of Neuhausen and Schwabing West. Thus, in addition to the program on the festival grounds, a sound walk in the neighborhood is also planned.
With all the anticipation of playing and researching together in presence, the interface to the world is still to be considered. Thus, all those who cannot be present on site can take part through watching the streaming sessions.